When it was first published in 1726, the book that we have come to call Gulliver’s Travels appeared, without any advance notice or fanfare, on the shelves of London booksellers under the title Travels into Several Remote Nations of the World, with the author identified as “Lemuel Gulliver, first a Surgeon, and then a Captain of Several Ships.” The name Jonathan Swift appeared nowhere on the book; rather, “Lemuel Gulliver” was portrayed in a frontispiece portrait that identified him as being fifty-eight years old and a resident of Redriff, a village on the Thames river to the south east of London, a logical place for a retired seaman to be living. 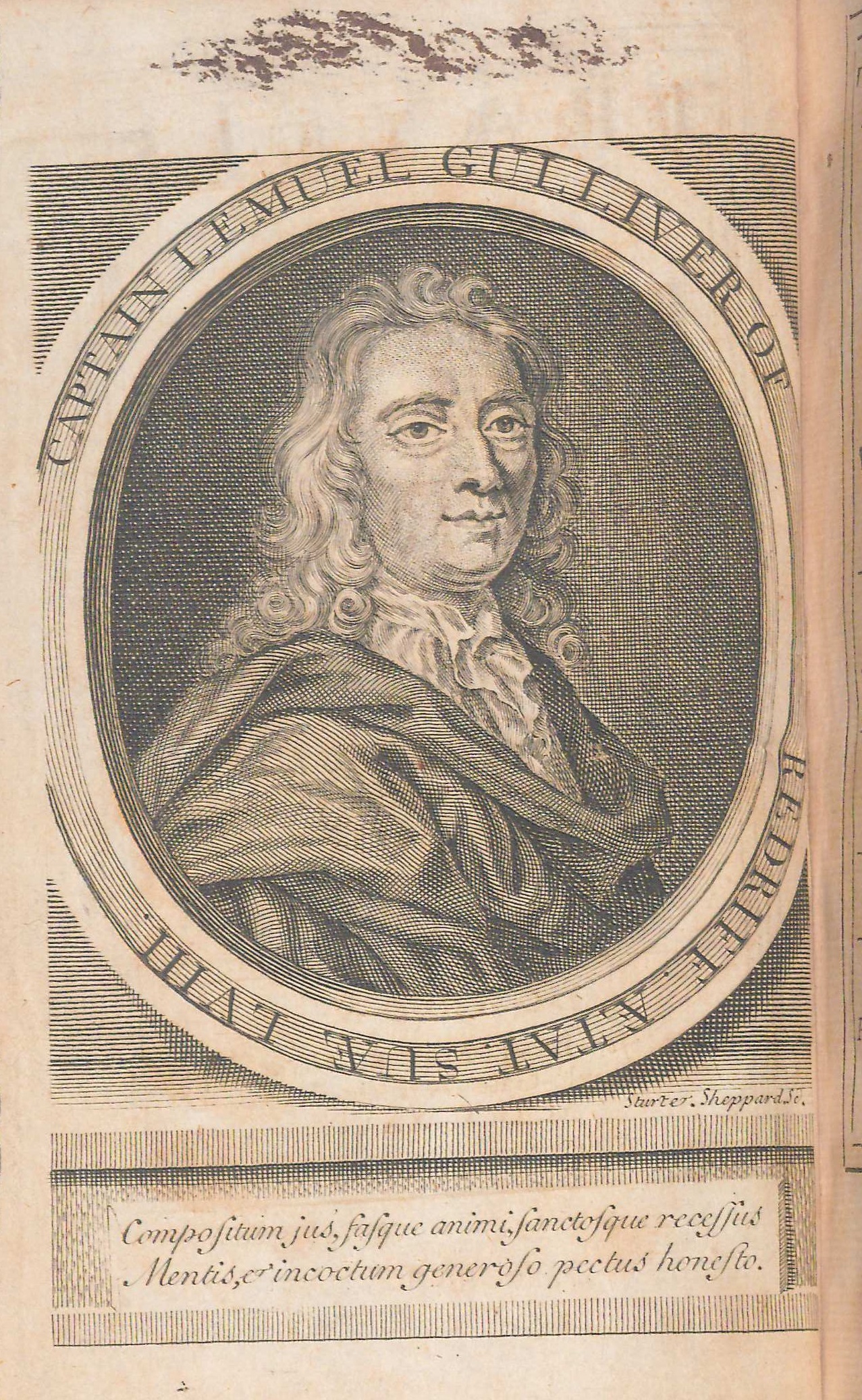 “Lemuel Gulliver,” from a copy printed for the second state of the the first, 1726 edition. The Latin caption, from the Roman satirist Persius translates as something like “justice, uprightness, and nobility of soul, in the sacred places of the mind, with a heart filled with generous honor.” University of Virginia Library There was no one quite like the book’s “real” author, Jonathan Swift, either. He was born in Ireland in 1667 to a family that was a part of the wave of English people who went there in that period, English Protestants who were encouraged to emigrate and take positions in Irish institutions in order to bind that island ever more tightly to English domination. Almost all biographical accounts state that his father, also named Jonathan Swift, died seven months before he was born. But there is no documentary evidence for that, or for his parents’ marriage, the date of his father’s death, or even for Swift’s baptism. Swift’s most recent biographer, Leo Damrosch, suggests that his real father may have been Sir John Temple, a wealthy English nobleman who was living in Ireland at the time and who knew Swift’s mother and her family. There is no way of proving this, but it would explain some things, such as how Swift would become the private secretary to William Temple, Sir John Temple’s son. Swift, without a living father who could arrange such a post for him and having had an undistinguished career as a student at Trinity College in Dublin, would not have been an obvious choice, and he seems not to have met William Temple before he began working for him. We will probably never be certain of the truth here, but it is clear that Swift cultivated a certain amount of mystery about his private life. Although we know, for example, that he had intimate friendships with several women, notably Esther Johnson (to whom he gave the name “Stella”) and Esther Vanhomrigh (who he referred to as Vanessa, a name that he invented), the full nature of these relationships eluded, even mystified people then, and frustrates us now. (Some people believed that Swift and Stella had been secretly married; others thought that idea was ridiculous.) Friends found him witty and generous, but he could also be demanding and moody. He suffered for much of his life from Meniere’s disease, a disorder where fluid builds up in the inner ear. The condition sometimes left him bedridden for days as he dealt with intense vertigo and nausea; he eventually went deaf. Satirists are often outsiders, and it is not hard to imagine how Swift might have felt himself to be an outsider to his society, set apart by his birth and his health to be an ironic observer as often as a full participant. 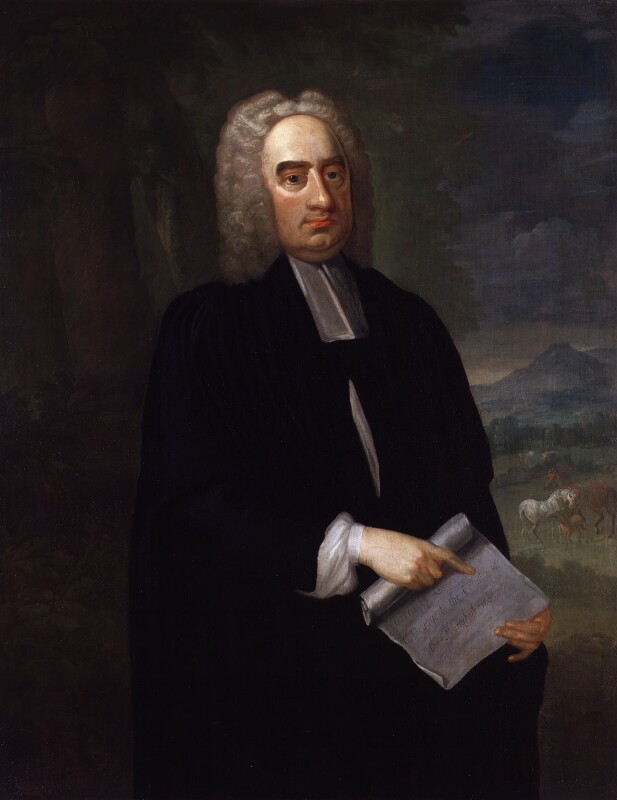 Jonathan Swift, as painted by Francis Binden in about 1735. Swift holds a copy of the manuscript of part IV, the voyage to the Houyhnhnms, in his hand; in the field outside can be seen horses, referring to the theme of the book.Part One: A Voyage to Lilliput 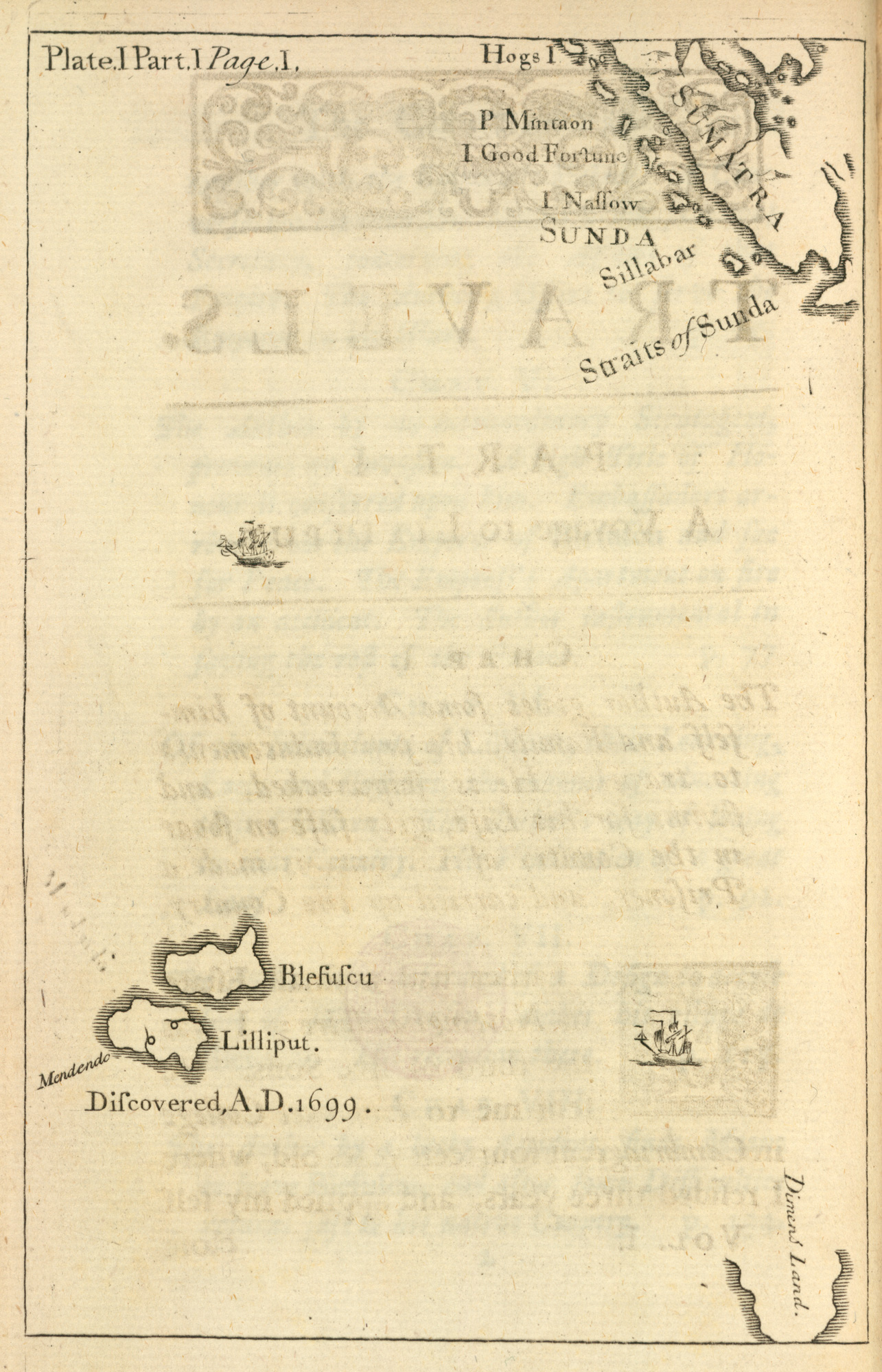 The Open Anthology of Literature in English is licensed under a Creative Commons Attribution-NonCommercial 4.0 International License.